AT COMPTECH, OUR FOUNDATION IS DEEPLY ROOTED IN PROFESSIONAL MOTOR SPORTS AT THE HIGHEST LEVELS.

In 1992, driving the Comptech powered machines; Parker Johnstone claimed all 11 poles in that season in the IMSA Camel Light Series.  This then lead Comptech to develop the Oldsmobile Aurora and Chevy INDY  V-8 engine for the IRL (Indy Racing League) series in the late ’90’s through 2002 as well as producing top performing Chevrolet V-8 engines for IMSA (International Motor Sports Association).   Additionally in ‘94 & ’95 a Comptech engine went to victory lane in the Daytona 24 Hour race in the World Sports Car Class.

In the late 90’s and 2001 Comptech developed a Honda engine for Real Time Racing for the Speed World Challenge Series.  These engines won many races and championships.

In 2002 – 2003, Comptech built engines for a number of Toyota Atlantic series teams. 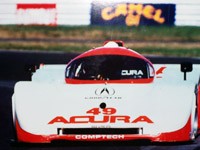 In 2008 Comptech race engines saw more victories in the Speed World Challenge Series and various SCCA events.  One such win includes a win for the a Comptech engine was at Miller Motorsports park in Utah.

In 2009, COMPTECH developed the first Honda NSX engine for a Daytona Prototype in the Grand AM Series.

In 2009 the Comptech powered Mazda 6 engine of Tri-Point Motorsports would win 3 races.  Many other World Challenge Series Mazda’s would sit on the podium throughout the year with Comptech Engines.

COMPTECH is preparing for the 2011 – 2012 Grand AM Continental Tire Series a Mazda MX5 engine for C.J. Wilson racing.

In 2007, COMPTECH was purchased by Fred Penney, owner of Penney Racing Supply. The operation was moved to the new 18,000 sq. ft. PRS facility in Sacramento,Ca.

Comptech has been and continues to build racing engines for ALARA motorsports and Freedom Autosports that race in the IMSA Continental Tire Sports Car Challenge Series.  This includes a Mazda Comptech powerd MX5 winning the Champtionship in 2015 and in 2016 a win at Lime Rock.

Comptech continues to build quality, fast, high powered racing engines for teams all over the world.  Comptech’s engines continue to win races throughout the United States and all over the world, too numerous to list.